Tim visited from NYC and we went climbing in the best climbing areas in Catalunya.face

On Monday at 9am i picked up Tim at a bar near La Sagrada Familia in Barcelona and an hour and a half later we were already parking the car in the parking lot of the El Duc sector, in Arboli 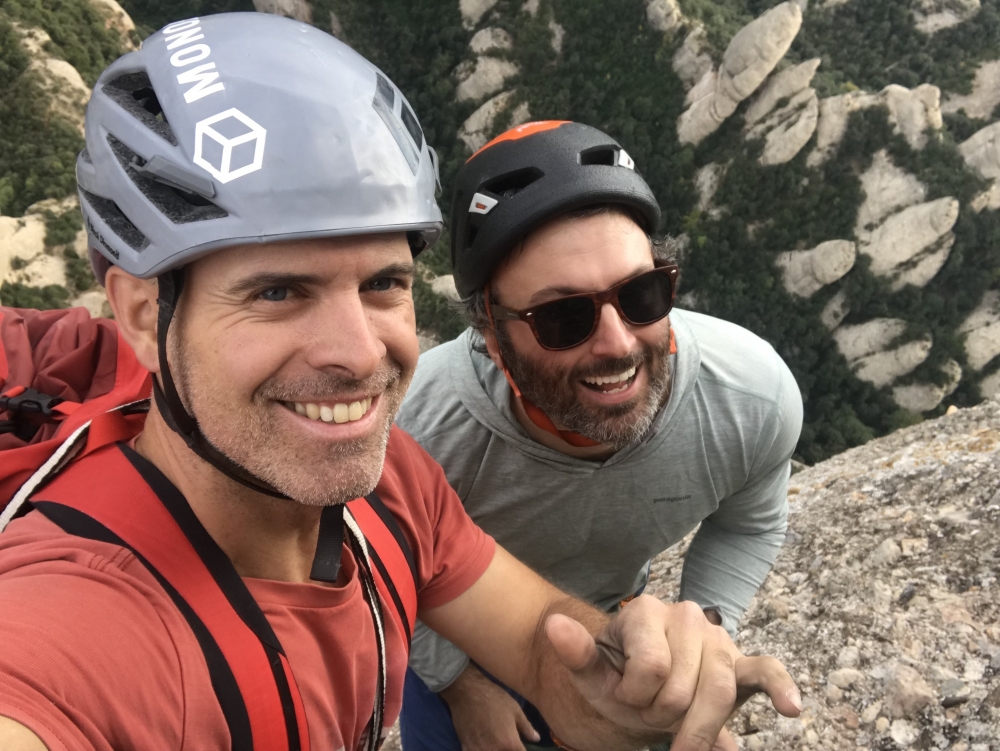 With Tim in Montserrat

Tim is an experienced climber. He´s climbed for many years and now he had 5 days to climb in the area. The main reason for his trip was to climb in this region so known worldwide. So after a good warm-up, we started to climb little more difficult routes and, as I imagined, it was not a problem for him. Our first day of climbing came to an end and we went to the bar for a beer and plan the next few days. 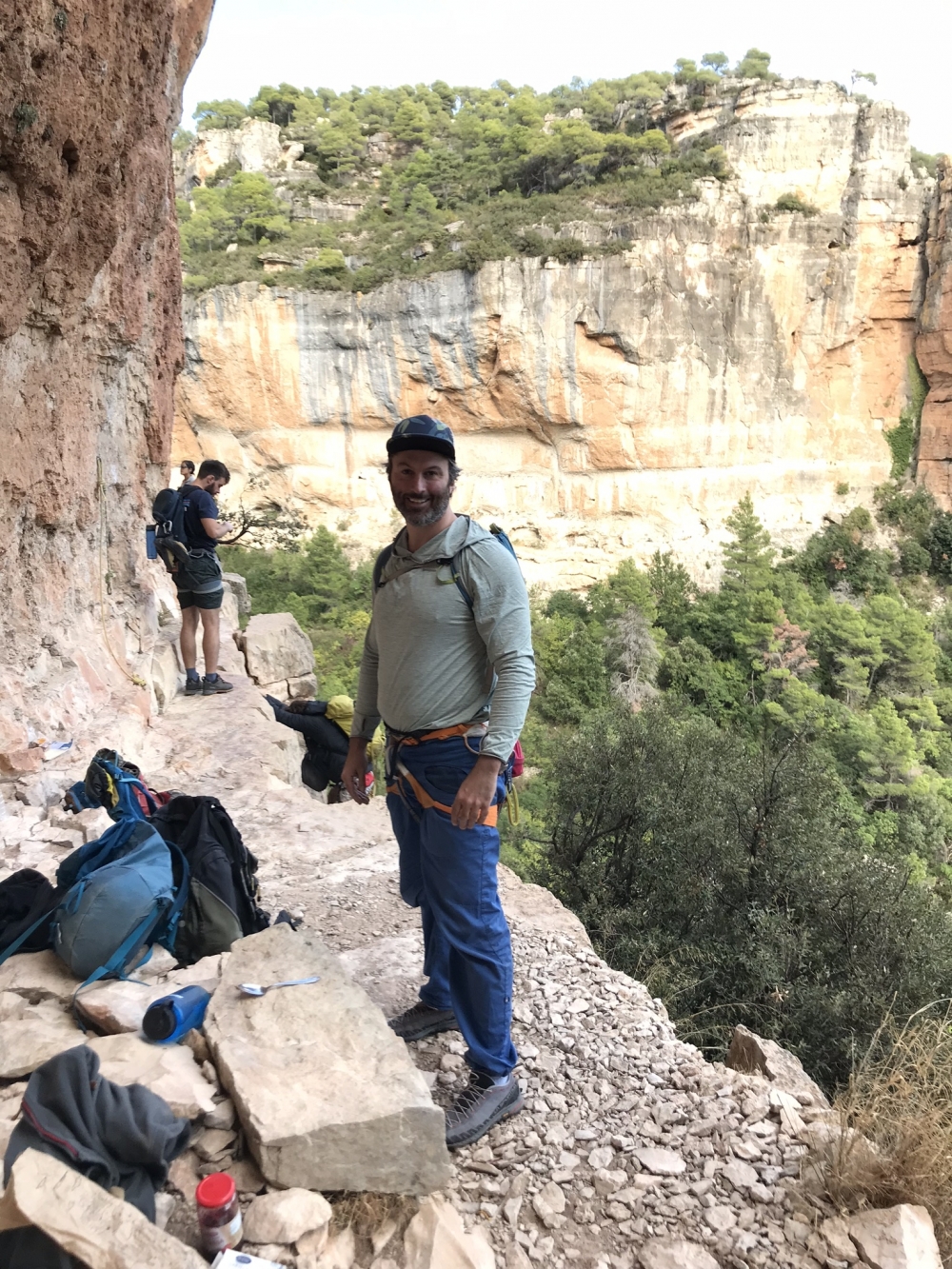 The second day we went to climb in Siurana. We toured some of the most emblematic sectors, such as El Pati, El Aparador, EL Cargol and La Siuranella Este. Tim was able to lead all the climbs and we had a great day, full of laughs and good times. At the end of the day we stroll through the town of Siurana and enjoy the majestic views.

The third day we went to Margalef. The chosen sector was Can Pesafigues, which has easy climbing routes, but also some slightly difficult routes. It was very motivating to see Tim try harder climbs than the ones he usually tries and be able to send them. 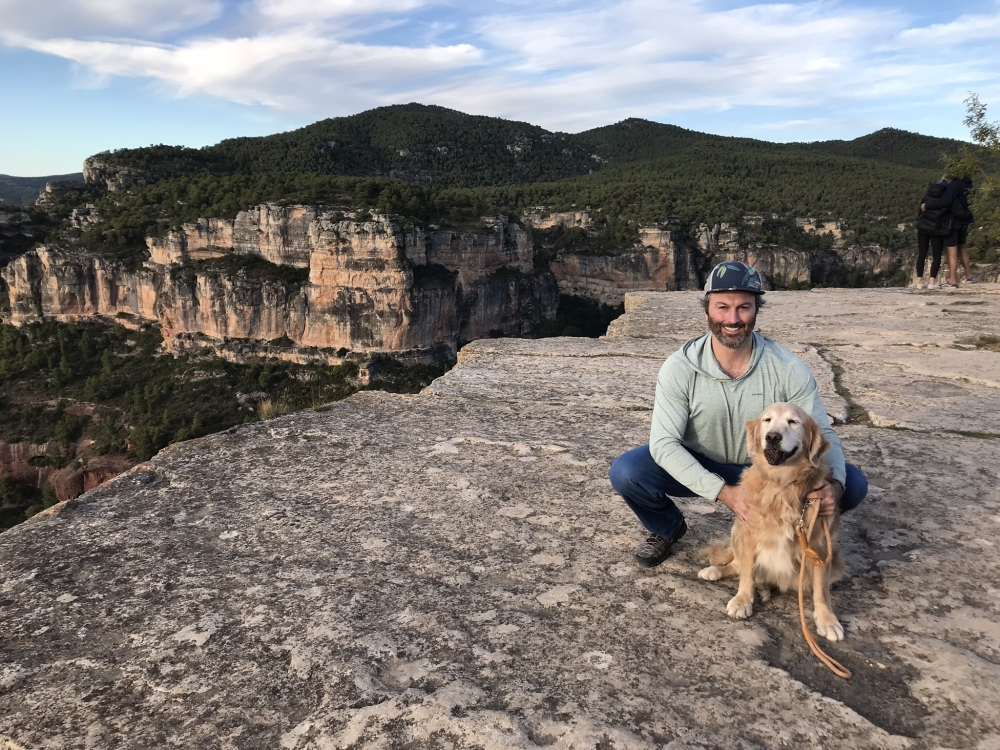 On the fourth day we decided to practice some multi pitch maneuvers, since the next day we would go climbing in Montserrat. So we stayed in Siurana and we were able to refine and practice all the necessary maneuvers to safely climb the next day. 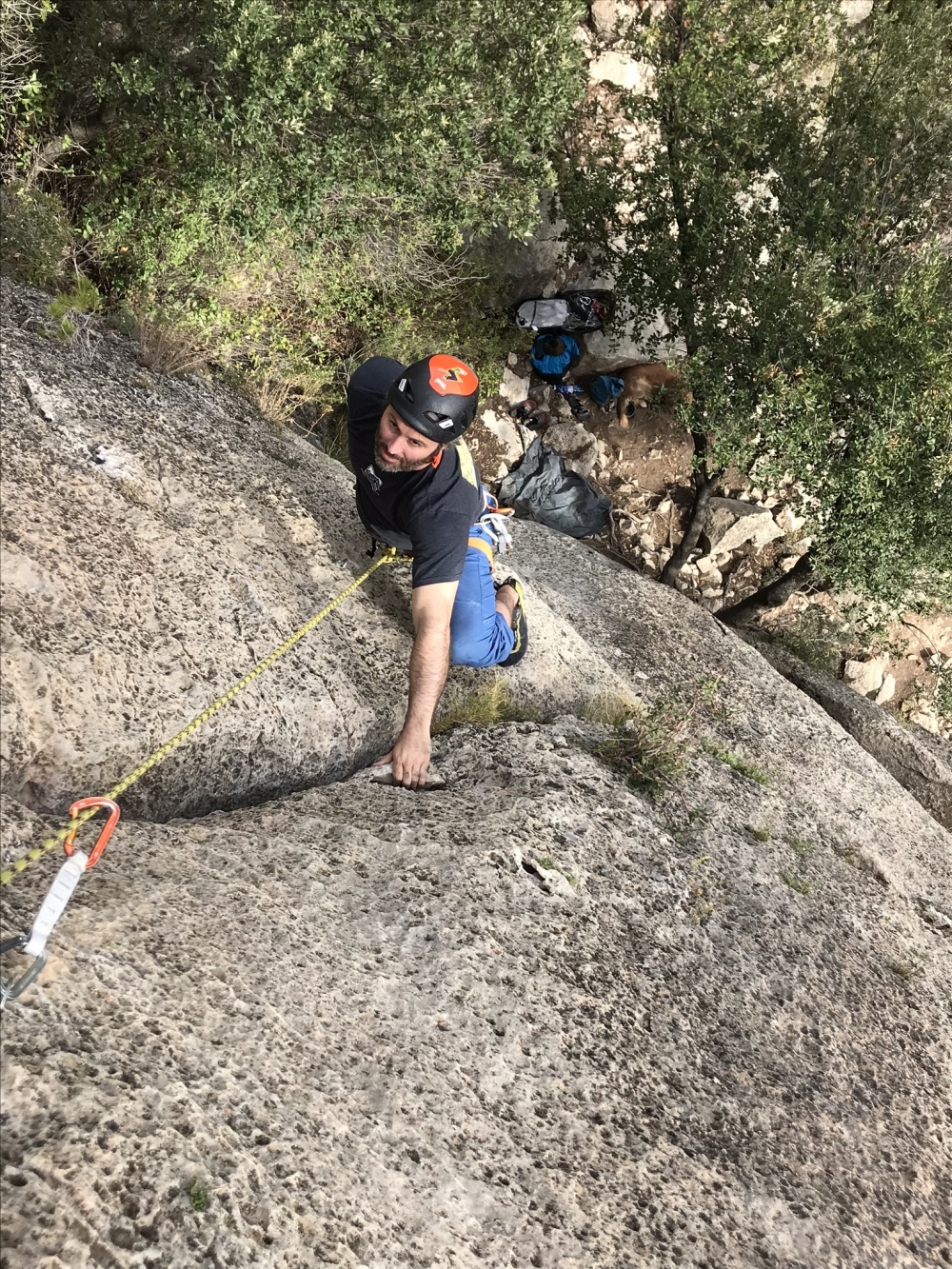 On the fifth and last day we started early. Tim had to be at the airport at 3pm to get on the plane. At 8:30 am we were parking the car in the Santa Cecilia parking lot in Montserrat. We arranged all the gear and started hiking. We would climb on the Punsola Reniu. A little later than 9:30 we started climbing. The first pitches are fast. At the 6b pitch, I climb first and belay Tim, who elegantly climbs the pitch. I lead again and belay Tim on the 6c+. This length is somewhat more difficult. It is a long, hard and somewhat polished, but Tim manages to resolve the movements and although he falls once, he manages to pass and we continue from there to the summit. 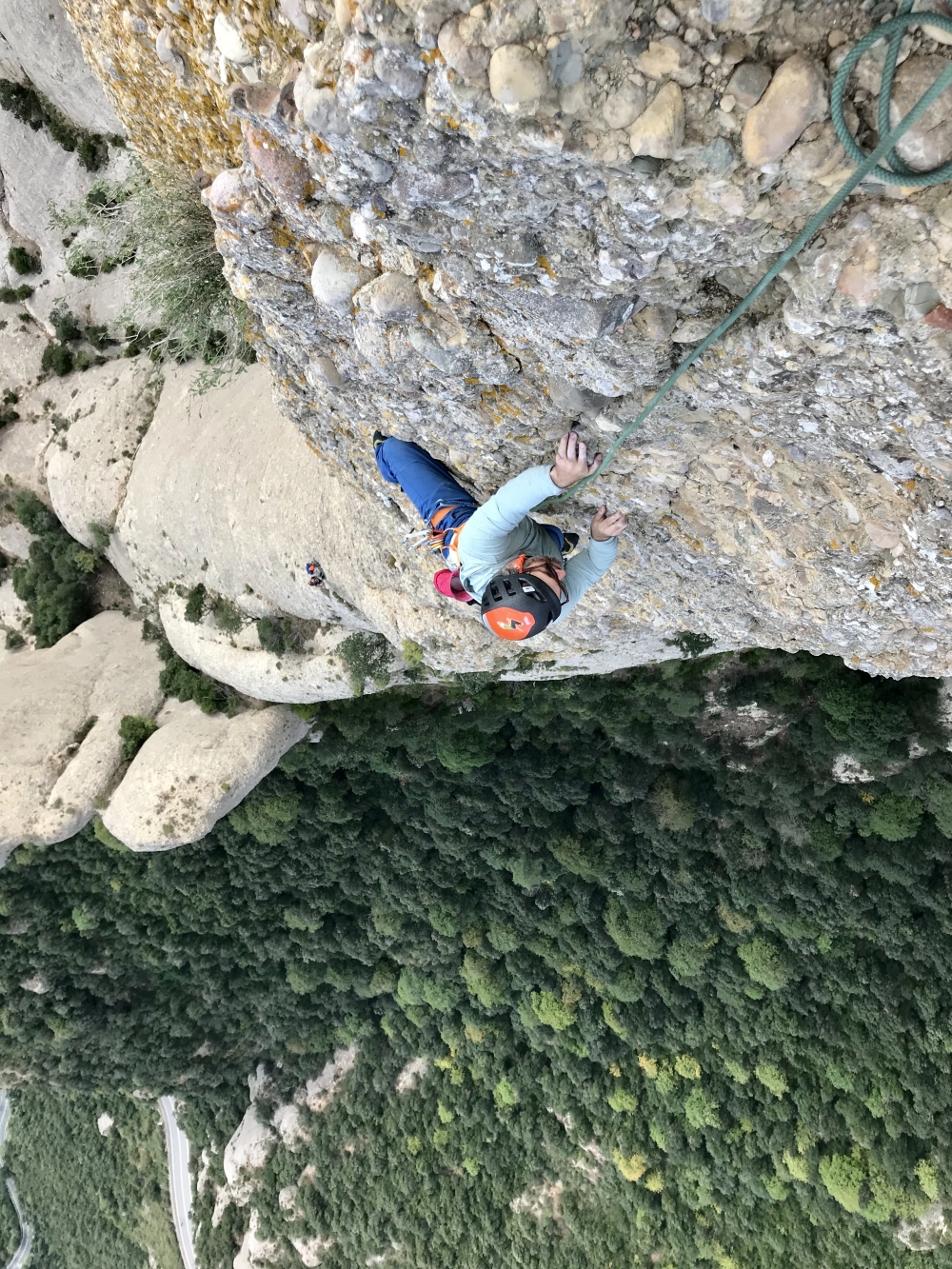 We take the mandatory summit photos and a couple of rappels leave us on the path that goes down the Cavall canal. At 13:20 we are back in the car. We have plenty of time to get to the airport. 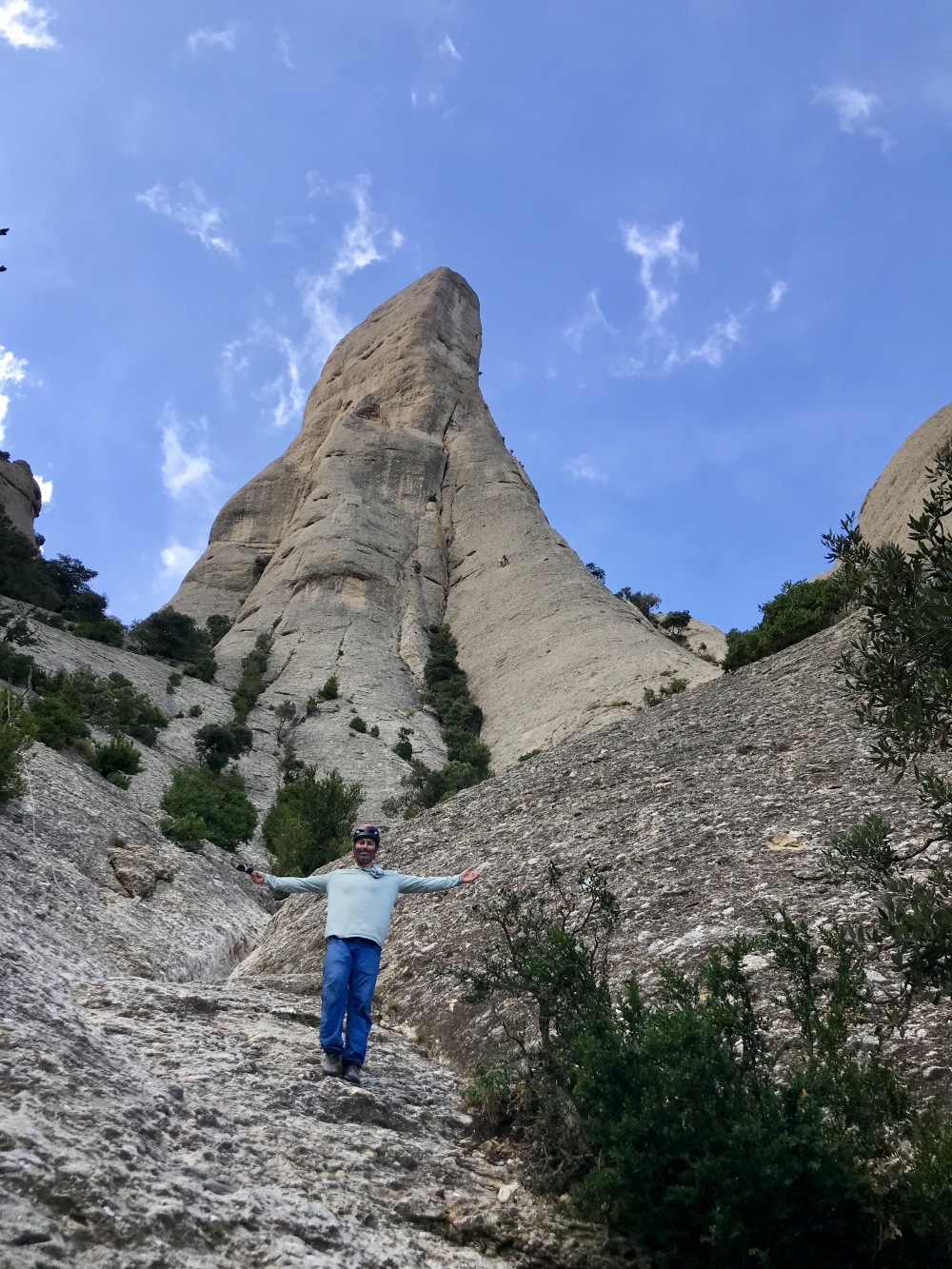 It's been an amazing week with Tim, lots of laughs, long talks at the bar after climbing and good times shared on the wall. Thanks Tim.

We spent 4 days climbing with this two crazy California guys in some of the world best crags. It was a blast.

THE DAY WE CAN CLIMB AGAIN

What will happen when we get to go out and climb again? We´ll do the same mistakes?

It‘s already the second time I could climbe with Santy in the Siurana area. I appreciatet the friendly and very professional way of my guide. Always open to adappt the difficulty of the climb to my desire and abilities. I was shown amazing places and felt in very good company.
The additional informations about cultur, tradition, history of the area made the experiance complet!
I‘m looking fortward to the next climbe! Thank you!
Urs

Great experience, in which we have enjoyed both children and adults! We hope to repeat! Santi has made It all very easy for us. Thank you!